MetroMap to feature at "Immerse" during Bloom Festival

MetroMap is proud to be the official mapping & presenting partner for IMMERSE - a mixed media event showcasing the future of entertainment. This month-long event features a revolutionary new immersive and interactive experience, being launched for the first time in November, by Light ADL - Adelaide’s new not-for-profit home for technology-inspired performance and art.

Narrated by Erik Thomson, this showcase is a 360 degree animated experience held in Light's breathtaking new space, the ELLIPSE, that will take audiences on a vivid 45-minute journey through time to discover how water has shaped our state. From 50 million years ago when this land was covered in dense rainforests, to the celestial significance of local waterways to the Kaurna nation, Immersion reveals how those same molecules that arrived from the furthest reaches of our solar system still connect us today.

Throughout the show, viewers can move to interact with the incredible scenes in front of them; throwing paintballs over the city skyline, controlling schools of fish with their hands, spotlighting animals in the dark Australian bush or making ancient tropical plants come alive. Imagine Virtual Reality, but shared with 39 other people, and not a headset or controller around. As you walk around the ELLIPSE, the screens will take you to different stunning locations, many showcased using MetroMap 3D models.

"Immersion will be a feast for the senses. I can’t even begin to explain what it feels like to walk into a room where the walls dissolve away and an awe-inspiring landscape stretches out around you. But then, to have that landscape begin to respond to your movements is another thing again. Together with your friends and family, it really has to be experienced to be believed. The team we’ve assembled to create this show have had a hand in major Marvel movies like Thor, the Lego movie and the Harry Potter series, so they’re sure to create some spectacular worlds for you to enjoy.” 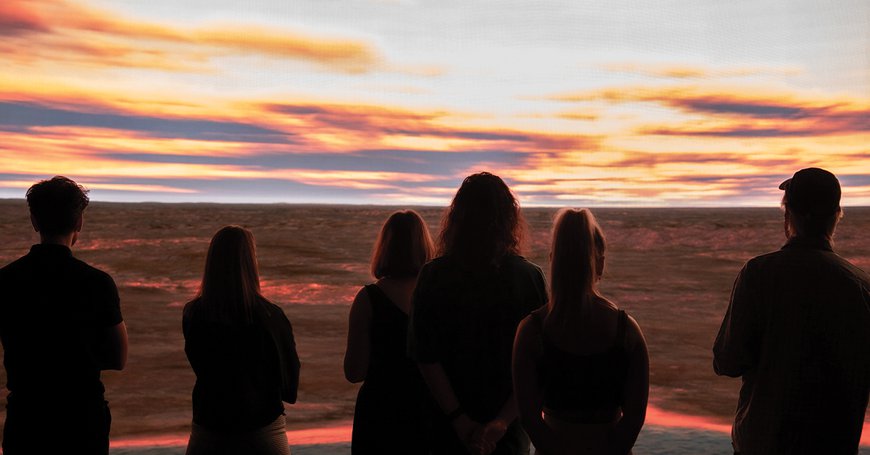 What does it feel like to be completely surrounded by a digital world that responds to the way you move? Find out at Immerse this November.

Everything looks different from above – especially when captured using the latest technology to create breathtaking views of the world’s most spectacular cities. Glide above Adelaide, dart through Melbourne like Superman, or float above a 1940s view of Sydney with a drink in hand and without a care in the world. Among the various showcases at Immerse, visitors will be able to experience this free exhibit, put together in collaboration with MetroMap 2D. This installation will feature MetroMap's high-resolution 2D aerial imagery, presented in a never-before-seen way.

Experience the medley of immersive technology and award-winning food

This combination of cutting-edge technologies has never been brought together for live audiences before. But the sensory overload doesn’t end there. Visitors will also be able to extend their experience at IMMERSE by booking a matching premium tasting experience, featuring some of the best South Australian produce, hand-crafted by Aurora’s award-winning head chef, Brendan Wessels. These tasting journeys will also be accentuated by Augmented Reality technology, helping reveal notes on tasting and provenance. There will be many other surprises throughout the building and surrounds for guests to explore throughout IMMERSE, too.

MetroMap's partnership with IMMERSE builds on the company's relationship with the organiser, Light ADL that uses 2D and 3D datasets for testing and developing their visualisation platforms.

The Aerometrex 3D and R&D teams have been working closely with Light ADL and are excited by the opportunities of the IMMERSE collaboration.

Geospatial Innovation Manager at Aerometrex, Fabrice Marre says, "We are very lucky to have such an immersive venue space in Adelaide where the real and virtual world is merged into interactive experiences only limited by our imagination. Combining our latest 3D mapping technology and high-resolution 2D aerial imagery with real-time game-engines and the immersive displays will enable people to experience space and time like never before."

Tickets are on sale now. Head to www.immerseadl.com.au to find out more.