3D Photogrammetry and the future of gaming

Gaming, virtual and augmented reality, and other immersive experiences have come a long way in recent times – and 3D photogrammetry is beginning to make major inroads into the development process.

Used in-game engines such as Unreal Engine, photogrammetry is helping transform graphics to the extent that characters, objects and environments appear almost most real. Developers, particularly at the triple-A top of the market, are on the hunt for greater immersion and accuracy. We wanted to talk about why interest in photogrammetry is increasing, and the role it’ll play in the future of game development. We work in LiDAR and photogrammetry and are keenly watching how the industry is evolving.

What is 3D photogrammetry?

Photogrammetry is simply overlapping various images of an object or place (like a pot plant or cityscape) taken from different angles, stitching them together in state-of-the-art software, and ending up with an accurate 3D digital representation.

We can take photos from the ground or hooked up to a rig, drone, helicopter, or even a satellite. The 3D model – complete with accurate measurements – is then easily imported into the game engine to generate realistic worlds.

From maps to The Matrix

Before gaming, photogrammetry was originally seen in the mid-19th Century to make topographical maps. Since then, it’s been used in game engines to create immersive, interactive content for different industries – from architecture to archaeology, medical, manufacturing, engineering and even film.

You might recall that infamous scene in The Matrix when Keanu Reeves bends backwards on a rooftop to avoid a spray of bullets. That entire environment was created with photogrammetry. The sequence was a technical marvel based on surprisingly simple technology. An array of cameras set in an arc around Reeves fired in a precise sequence. The captured 2D still images were processed and merged together to create the illusion of 3D movement. That process is a micro-example of how photogrammetry can build 3D worlds and action from 2D images.

So, it makes sense that game designers and developers would end up adopting the 3D visualisation technique to build ultra-realistic worlds – especially as it can be up to five times faster than making models from scratch. 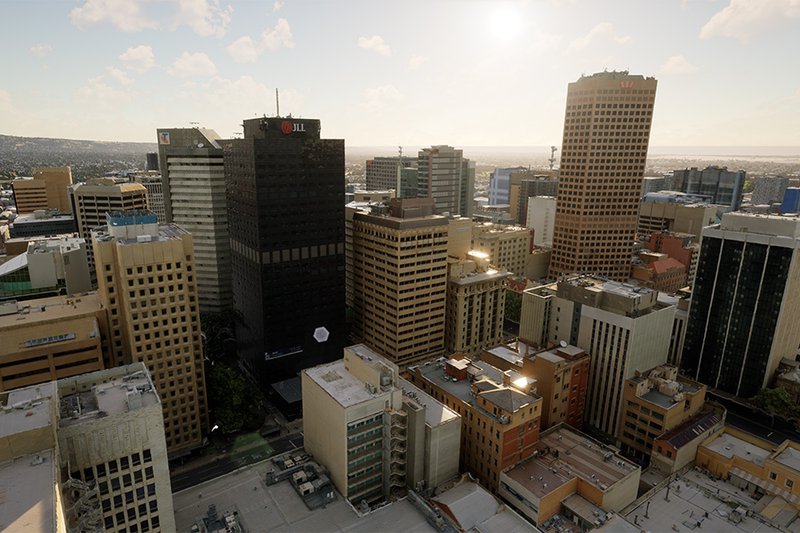 Our 2020 high-resolution model of Adelaide shown in Twinmotion

Photogrammetry has begun breaking into the videogame development from small indie developers up to “Triple-A” level where production costs number in tens of millions of dollars.

One of the early forerunners of 3D photogrammetry in video game engines was in the horror adventure release, The Vanishing of Ethan Carter. In 2014, The Astronauts studio attributed the spectacular scenes, objects and textures to 3D models of real-world items – reportedly shaving years of work off the project. The game is based on open-world investigation and environmental exploration with minimal player guidance. Photogrammetry brought the Polish Karkonosze mountains into the game, making for a more immersive, real-world experience.

A year later, EA DICE announced Star Wars Battlefront would use the technique to digitally reproduce props, costumes and fan favourite locations. The story goes that Lucasfilm let the DICE designers photograph real props from the franchise, using high-resolution cameras from every possible angle. So, when gamers pull out a lightsaber, they’re using a direct digital replica of Darth Vader’s original weapon.

Games based in real-world locations are at the forefront of photogrammetry in the real world and are most responsible for showing just how powerful they can be. Racing simulation franchise Forza Motorsport uses photogrammetry and LiDAR scanning to re-create iconic race tracks with ultimate realism. Forza Motorsport developers Turn 10 studios take recreation seriously enough to match trackside forests, trees, and rocks in-game. Other sports and open-world sandbox games wanting to recreate the real world can adopt photogrammetry

Now, almost anything can be custom cloned. From a rock to a rocketship, the possibilities are endless. And as we reported previously, Epic Games recently acquired Quixel, uploading over 10,000 2D and 3D photogrammetry assets for their Unreal Engine developers to access. This is sure to see even more evolution in the gaming industry. 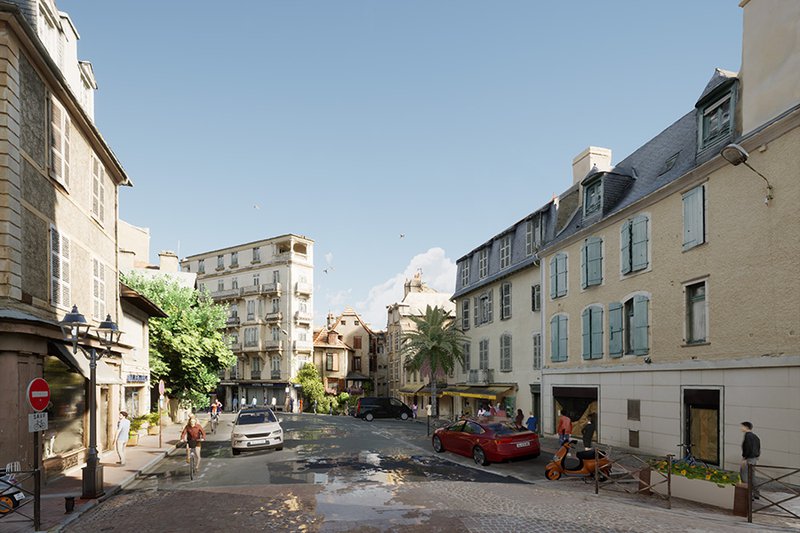 This 3D city model of Pau, Southern France, is a multi-scale 3D mesh model generated from helicopter, drone and ground-level capture that's been loaded into Twinmotion 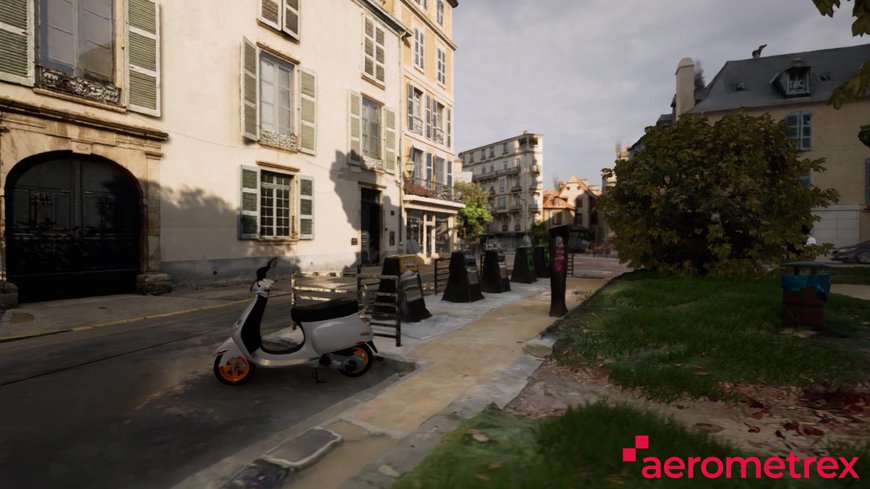 Those gaming-focused attributes are a vital part of why our interest is increasing. We can simulate real-world lighting for a building project then draw from Quixel’s 3D photogrammetry asset library to populate the world with realistic assets. Our R&D team has begun working with 3D architectural visualisation system TwinMotion exactly because of how detailed the renders are, and the ability to enrich them with a library of object and people models. 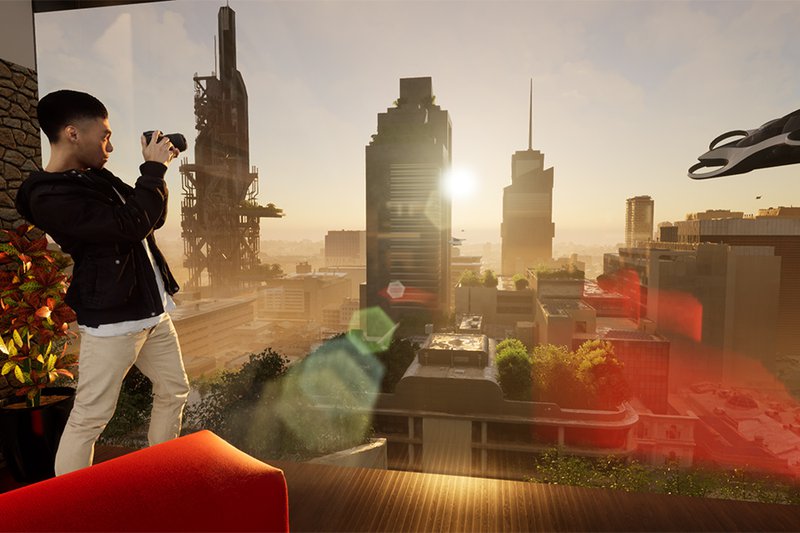 The future of photogrammetry and gaming

In an age of ever-improving technology, we’re excited to see what will come next. Two of our core services are high-resolution photogrammetry and LiDAR, making us fully equipped to meet the market as those processes mature within the gaming industry.

As we already reported, the anticipated release of Unreal-Engine 5 and their Nanite technology later this year won’t just transform gaming as we know it. It will also allow other industries to effortlessly integrate city-wide 3D mesh models – like our digital clone of Adelaide, produced in real-time architectural visualisation tool Twinmotion. This raises another interesting angle we’ll be discussing in future; game engines for non-gaming industry visualisation. There’s plenty of industries that work in accurate measurement and real-world fidelity imagery. We capture and process the LiDAR and photo data and are seeing game engines as the ultimate staging platform. The size and value of the game industry is pushing innovation rapidly, creating more compelling reasons for us to use game engines.

So, when it comes to pairing real-world photogrammetry with game engine visualisation, a world of opportunity awaits.

See our 3D models in Twinmotion

Contact Us to learn more about game engine visualization